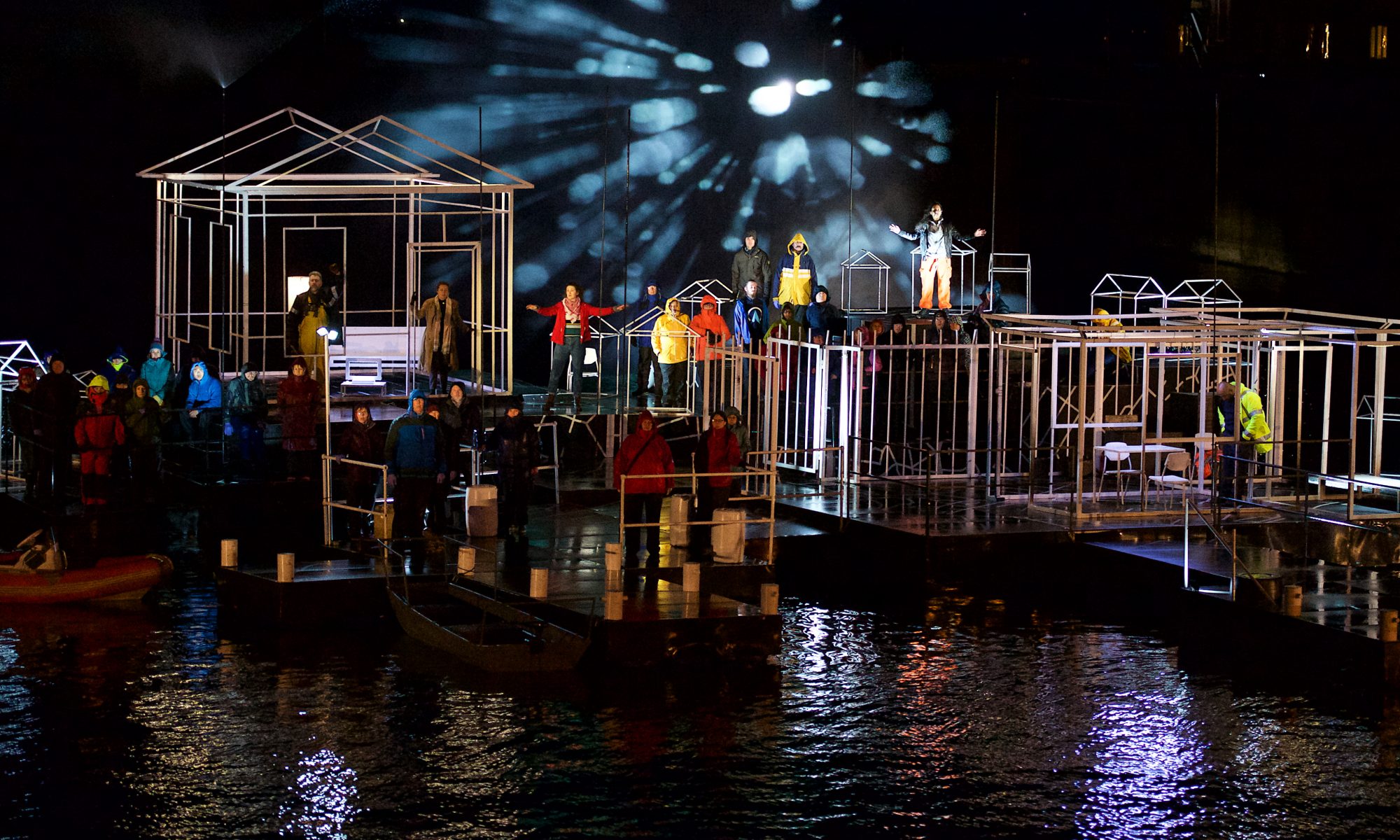 Flood, a show of four parts, had four main themes.

This wasn’t deliberate, honest. It just evolved that way.

Inventing and developing themes is massively rewarding fun that you only really get to do on long projects – for example, on multi-part theatre, or feature films. It’s all about exploration and trying to push the boundaries of these tiny motifs in melody, rhythm and sound design.

An audience member may notice thematic development, or they may not. They may hear it only subconsciously, a sense of familiarity creating a feeling of significance.

But never mind the audience – working with themes is both really useful and really fun (but don’t tell them that!).

At one end of the practicality scale, developing themes in the way I’ve done in Flood enables you to make a coherent score – it feels like part of a whole, it feels deliberate, it’s a signal that all parts of the show – performance, set design, lights, pyrotechnics – are held together in this sonic net.

At the other end of this ‘practicality scale’ (where practicality isn’t even the vaguest consideration), developing themes from tiny motifs is deeply satisfying and the challenge of putting all these little mathematical moments together into something that feels gloriously musical and maybe even deeply moving is what it’s all about. It’s about trying to find the point at which form, function and aesthetic become inseparable.

Gloriana’s theme was tripartite, a trinity of musical elements, which seems appropriate – she’s some sort of Holy/magical being after all, according to most of the other characters…

This is a cryptogram of Gloriana’s name using the ‘French’ method.

Part 2 – a rhythm based on morse code:

This was Alan Lane’s idea, can’t take credit for it. The rhythm isn’t quite precisely morse code – I made it more rhythmically regular. It feels more musical by having a sense of a steady pulse.

Part 3 – an ambient sound design for when she uses her powers:

(There’s also a recorded sound montage of voices and city sounds for when Gloriana is listening to the thoughts and ambience of the city and its inhabitants made by Matt Angove, Slung Low’s sound designer and engineer.)

Theme 2: Look Across The Ocean – a love song

Listen to the whole song on iTunes etc.

Super simple, and derived from a moment in the original string quartet accompaniment to the Love Song (the one I sketched up before I got it properly recorded with real musicians). Just a little, subtle something to underline any mention of this character in Flood part 2, it evolved into big tunes in parts 3 and 4.

In parts 2 and 3, this was a theme for boats, refugees and anything to do with things that happen at sea. This evolved into a handy underscore in part 4 to describe the relationship between the Captain (the ‘Fisher Man’) and his son.

i.e. dark and stormy and not going well at all.

Most of the material in all four shows comes from these four themes.

Orchestration, the instruments or sounds that are used to perform each of the themes, plays an equally significant part in how the themes are voiced. Originally I limited it to a pallete of mainly string quartet with string ensemble support, harp and piano.

The orchestral palette then evolved to string orchestra with electronic bass rhythms in Flood part 2, with chorals (from Sheffield Chamber Choir), electric viola (at one point I thought the Captain was represented by the viola, but changed my mind as it got too restrictive), and solo singer. Here’s the moment the Wave approaches the City by the Sea :

Did you spot Gloriana’s rhythm in the bass and the first 5 notes of her melody in the strings a bit later?

I used a lot more sound design and electronic synths in part 3, bringing in the occasional french horn or brass moment.

Then, finally, in part 4, I used a full orchestra alongside big chorals and a more extensive percussion section. By then, the show needed a really big and varied sound and a larger palette made it much easier to show a clear definition between the three islands. James and I put together another song for the 3 Islands and I ended up with three more melodies to represent each island which were intertwined through the show with these four overarching musical themes.

I can sometimes go a bit overboard with the thematic machinations, but, hey, I enjoy it, and it means I’ll probably never run out of ideas. Touch wood.

You may not have seen some or all of Flood…

Part 1, From The Sea, is a short film, a prologue or introduction to the series. It shows how Gloriana came to be brought up for the ocean depths by a fisherman and his son on a trawler out in the North Sea. Watch it here.

Part 2, Abundance, was a play performed to a live audience. It was set on a floating stage in a dock in Hull, showing life before the Flood, the coming storm, and the way that it destroyed England as we know it. Part 2 was audio-recorded and became a 5-part podcast featuring interviews with cast and crew.

Part 3, To The Sea, is a play like part 2, instead filmed for broadcast on BBC2. It shows what life was like immediately after the wave struck, bookended by moments on an island set six months after that.

Part 4, New World, was a play performed to a live audience again. It started at a point six months after the Flood, when England has become three islands with wildly differing philosophies. Holy Island worships Gloriana; Renaissance Island looks only forward whilst ironically believing the only way forward is to build the world back as a ‘new and improved’ version of what it was before. Albion Island is a harsh, cruel place where it’s treason even to speak Gloriana’s name.

This site uses Akismet to reduce spam. Learn how your comment data is processed.